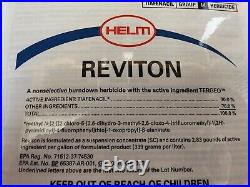 RevitonT herbicide, which was recently launched by HELM Agro US, is a new and powerful tool to combat some of the toughest problematic weeds in growers' fields today. A non-selective herbicide with a new active ingredient for preplant burndown of broadleaf and grass weeds in corn, cotton, soybeans and wheat, Reviton prepares fields for a clean start while protecting emerging crops against the threat of resistance.

We are really finding out that weed management continues to change and evolve. And the products we need to address those changes also need to change, says Dr. Larry Steckel, Professor of Row Crop Weed Management at the University of Tennessee. Traditionally, in the last decade it's been horseweed or marestail that we're really struggling in trying to control.

We've used traditional products to take this weed out, and as those products proved to be successful with horseweed fading from the picture, other weeds filled that hole, says Steckel. Reviton has been a good fit to take out troubling weeds. Reason #1: New Active Ingredient.

One big reason why growers should consider changing up their preplant weed control regimen is Reviton's new and revolutionary active ingredient called TergeoT. As a unique chemistry new to the U. Crop protection market, Reviton will serves as a powerful tool for more sustainable resistance management, says James Whitehead, Agronomy Leader for HELM Agro US. "Reviton used preplant or preemergence ahead of planting will help take the selection pressure off other chemistries like dicamba, 2-4-D and even glyphosate in order to maintain and preserve their utility for in-season use, " he says. With resistance on the rise for some of the more popular chemistries, Reviton as a burndown replacement will be a huge benefit.

More than 700 North American product development trials and regulatory studies stand behind Reviton's powerful weed control performance and crop safety advantages. According to Whitehead, Reviton has demonstrated extremely high-performance ratings in burndown efficacy, controlling more than 50 broadleaf and grass weeds including ALS, triazine and glyphosate resistant species. "For growers struggling to gain control over known resistant species like Palmer amaranth, lambsquarters, giant ragweed and marestail, Reviton brings relief as a new solution for these specific challenges, " he adds. Whitehead says an important advantage that Reviton has over comparative burndown products is its ability to deliver grass control. "Used alone or in combination with a tank mix partner like glyphosate, Reviton outperforms several products with improved efficacy in the control or suppression of barnyardgrass, crabgrass, foxtails, seedling johnsongrass and wild oats, " he says. Reviton is an essential complement to the weed management toolbox and is equipped to become the backbone of effective and sustainable weed management program where rotating multiple modes of action are required to defend against yield losses due to resistance.

Reason #3: Fast and Flexible. Reviton, which is a PPO-inhibitor herbicide with a Group 14 classification, is described as being fast-acting with foliar effects occurring within 24 hours after treatment when applied under optimal growing conditions.

Its active ingredient is rapidly absorbed by plants which shuts down chlorophyll production and photosynthesis. Within a few hours after treatment the foliage of susceptible weeds begin showing signs of wilting and yellowing. In subsequent days, tissue necrosis occurs followed by weed death. When used for foundational burndown ahead of planting, Reviton delivers fast results in comparison to auxin herbicides and glyphosate.

Whitehead says rapid burndown of early-season weeds allows for an earlier planting window, cleaner fields at time of planting, and improved operational and workload efficiency in the spring. While Reviton's speed of activity is much faster than comparative burndowns, its advantages don't end there. Reviton's crop safety profile also allows for crop rotation flexibility and plant-back intervals with little to no delay. For corn and wheat, the plant back interval is immediate at zero days, and for soybeans and cotton the plant back interval is just 14 days.

Formulated as a suspension concentrate, Reviton contains 2.83 pounds of active ingredient per gallon. Because of its high level of efficacy, Reviton's formulation uses low use rate technology that is applied in ounces per acre versus pints or quarts per acre. Providing greater options in use flexibility, Reviton can be applied alone or in a tank mix for enhanced performance with preferred products like glyphosate or glufosinate. According to Steckel, One of the things we noticed in our research is that Reviton played well with glyphosate.

We often see tank mixes where one herbicide may hinder the performance of another in the tank. Many times, a herbicide being mixed with glyphosate may interfere to where glyphosate is less effective on a particular weed species. But with Reviton we didn't see that at all. Reviton in a tank mixed with glyphosate consistently worked well across a lot of weeds. This item is in the category "Home & Garden\Yard, Garden & Outdoor Living\Weed & Pest Control\Weed Control\Herbicides & Fungicides". The seller is "swimbait6" and is located in this country: US. This item can be shipped to United States.